Full disclosure: I received a discount in exchange for this experience but as always my reviews are genuine. I have to pop this paragraph in here as part of my agreement with Hype Experiences, the experience manager who arranged this trip:
“Thank you @hype_experiences_london for arranging this media delivery. If you are a content creator, I recommend joining their community to review products! More info here https://hypeexperiences.com/about-for-reviewers“

SO! You’re in London, you’ve seen Bond films at some point, you’re not afraid of water, you like going fast and have planned ahead and booked…..yesssss, it’s the Ultimate London Adventure from the Thames Rockets! A 50 minute completely different way to experience some of the sights of London.

I’d seen folks schpeedboating past on the river just as a part of living in London but hadn’t actually thought of getting in a boat myself. I’m really not sure why… I feel like I neglect some of the touristy stuff London has to offer just because I live here. In other cities in different countries I’d probably be well in there and touristing it up but at home…nahh…can’t be arsed. However I’ve started to think about doing this more, especially as one of my best pals has started making an effort to have dedicated London tourist days over the last few years and even got engaged up the Elizabeth Tower with Big Ben hovering nearby (shout out to Lianne and Mark – visit Kote London for all your artisan concrete and resin needs).

It’s a bit of a weird time at the moment isn’t it, what with COVID-19 still looming over 2020 even six months after the first lockdown started (I say first, we all know a second is coming!) and so I wondered how this experience would fare in the strange conditions. We were told to board the boat at boarding gate 1 of the London Eye Pier. To be honest the Southbank was pretty busy (though it was a deliciously sunny Saturday at lunchtime) and I don’t usually wander around the streets with my mask on but I did feel more comfortable making my way to the pier with that added bit of protection due to the number of people around. I kept the mask on until we reached the boarding gate and only removed it after I had my life vest thingy on. Masks pictured above from Violets In May – grab yours HERE!

When we arrived we were greeted in a friendly manner and ‘checked in’ by a gent with an iPad looking thing.  Once our fellow passengers were all present and gathered (a couple masked, mainly not though as we were outside and not too huddled together) we were asked to come up one at a time – and only one person per group for distancing reasons – to grab life vests for ourselves and the people we were with. They were in a bucket marked ‘sanitised’ so that’s probably something new for the corona-era. We were

told step-by-step how to put the vests on which resulted in a few chortles (watch for that strap going between your legs, don’t tighten that one too much!) and everyone ended up with their vests on correctly – hurrah and other celebration noises! We were called up to board one group at a time, starting with the seats at the back. Izzy, our guide, and Nick Smith, our driver, were on the boat ready to greet us. Izzy stood at the front and ensured nobody fell over or into the Thames and once everyone was on we had a few safety bits mentioned to us including hand signals if we needed the boat to stop at any point.

As mentioned we had Izzy as our guide and I found her to be just the right level of fun, informative, witty and being generally nice/pleasant. She stood at the front of the boat while we cruised from the London Eye and Houses of Parliament right the way down to (probably) just past St Katherine’s Docks and gave us mini facts about bridges and buildings that we went under and past. For example did you know that Waterloo Bridge is also referred to as The Ladies Bridge because a whole bunch of women worked in construction (and many other areas previously unavailable to women) during the war, filling vacancies left by conscripted men… this included female welders, stonemasons and labourers and it’s these brilliant folk who the nickname references. I’ve had a look into this and it wasn’t until 2015 that it was fully acknowledged by Historic England that so many women were involved in the construction….until TWO THOUSAND AND FIFTEEN. What?! Anyway, feel free to google that one or click here for a quick link. Izzy said we could shout if we wanted any more information/had questions about anything we went past but nobody stuck up their hand, I think just being on the boat in the fresh air with her bants and historical deets were enough. 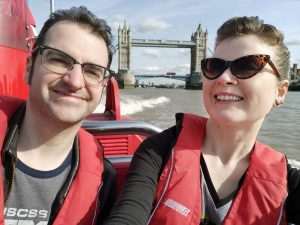 We passed a ton of interesting stuff including the Houses of Parliament, the MI5 HQ, Big Ben, Cleopatra’s Needle, Somerset House, the Tate Modern, HMS Belfast, the Tower of London and Tower Bridge taking us right the way down to Canary Wharf and getting a little glimpse of the Cutty Sark.  I hadn’t realised how fast you can access different parts of London if you boat it – I mean we really whizzed all the way to Greenwich from the London Eye…imagine being able to cut out all the tube faffing if we could nip on a speedboat for a few shortcuts! I need to get me one of these.

Most of the journey going past the proper sights was at a fast but not crazy pace. After we went under Tower Bridge however, Izzy gave us a little warning that after we were past the Police the speed limit on the river changed and Nick would be able to rev up the 880 horsepower engines and get us properly going! Izzy sat down for this bit (masked up) and Nick went full pelt taking us down to Canary Wharf, swooping left and right to a medley of choons that started as soon as we sped up. Of course one of the snippets was some Bond music – we were all BondJamesBond in that moment a little bit, I’m sure. We zig zagged around that section of the river and headed back, slowing down when we hit the Police point again and took in the sights on the trip back to the London Eye. Izzy again was around for any questions and asked to take photos for folks who wanted them – we were right at the back so I just took ours myself especially as my phone focus has been playing up recently (dang it) and I couldn’t rely on it playing ball.

We arrived back at the pier, thanked Nick and Izzy for the ride and shed our life vests into a bucket ready to be sanitised for another group.  Oh, just to mention too for anyone with ‘rona concerns that I think there were around 10 of us on the speedboat. I’m not sure if anything was different to usual but there weren’t many blank seats but I assumed this was fine as we’re outside and most of the time were pelting along at a fair rate. You’re also made to sanitise your hands before and after boarding the speedy little pal. I’ve been pretty careful myself since March and didn’t feel uncomfortable at all during this experience although I appreciate it’s all down to personal preference. Click here to view the Thames Rocket COVID page.  These lovely folks have been unable to run for a chunk of the year so it’s great to see them back in action!

I would definitely recommend this to friends and family and actually I already have done in the time between taking the ride and writing this post! Whether you live here or are just visiting I’d say take a look at booking a slot. If you want to get involved but can’t make it right now, you can always buy vouchers to use another time (hey, Christmas is coming up!) orif you’re travelling into London by train at some point you can pick up their 241 offer – click here for info!