Where am I?! Naples. Ah, phew. That’s ok then. So it’s my last day in the city and I want to get some traditional Naples grub.. where should I go? Well located off a side road from the Toledo I found Trattoria Nanni. It was pretty unassuming and we weren’t even sure if it was open but we popped through the door and found some staff happy to greet and seat us.

We showed up on a Wednesday lunchtime so it was fairly quiet with only three other tables seated. Decoration-wise it was kind of how I’d expect an Italian kitchen to be from an advert or something; lots of yellow on the walls  with wooden tables, chairs and paper table cloths.  Most of the back wall is covered with a large painting of Vesuvius and Naples Bay,  On the opposite wall we have a painting of a window with a fake clothing rail sticking out into the restaurant which has some bits and bobs hanging up, as you see around the city (there are a lot of clothes drying outside flat windows), one of which is a pair of classic briefs which I especially liked.  I have a fondness for the classic brief as my pal (ex FMPHer) Toli created the masterpiece that was The Brief Collection when we were in school together on MS Paint -a good 15 years back now at least. Beautiful.

Cost wise (important stuff), Peroni was 2 Euros and one way I judge prices is by wine – in this case the wine was nicely priced at 1.50 Euros per glass.  A bargain, but I stuck to beer.

For a starter I went for Marinaded salmon. I was a tad fearful as we had a strange fish experience when eating salted cod (a local recommended dish) in Venice once, but this salmon was actually very nice, full of fresh flavours. The texture was gorgeous and it just melted in my mouth, probably helped along greatly by the thinness of the slices. The fish was  served with a small amount of mixed salad in the middle but that’s secondary for me. Thumbs up to the salmon being cooked rather than raw, which was a good thing as previously the aforementioned Venetian local salt cod was stone cold and it always makes us wonder what a local dish will actually be after ordering. 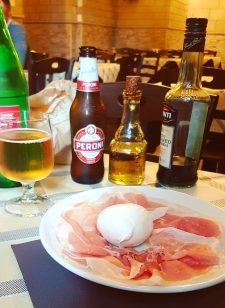 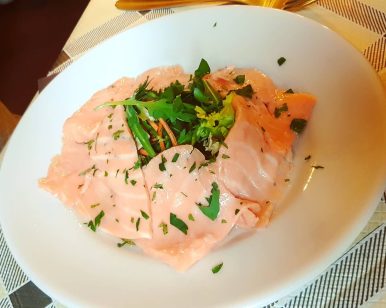 I wanted to grab some proper parma ham and mozzarella too which was as expected really! In contrast to ordering this kind of starter in the UK, I was given a whole ball of mozzarella – bloody dreamy – served in a proper bed of ham.  This was super lush for me as a big fan of both. I drizzled the plate with olive oil and as I ate I noticed just how generous the portion was – you really do get a ton of parma ham for your buck…er..Euro.

Mains was grilled swordfish! Something veering away from the norm for me, I was presented with two sliced of swordfish, served with mixed salad. It was quite meaty in texture and really enjoyable, a simple flavour with just a hint of pepper and I walked on the wild side, squeezing my lemon wedge all over. Yumsers, yes please! This wasn’t a “fishy fish” so this pleased me greatly. I’m not a fan of “fishy fish”. 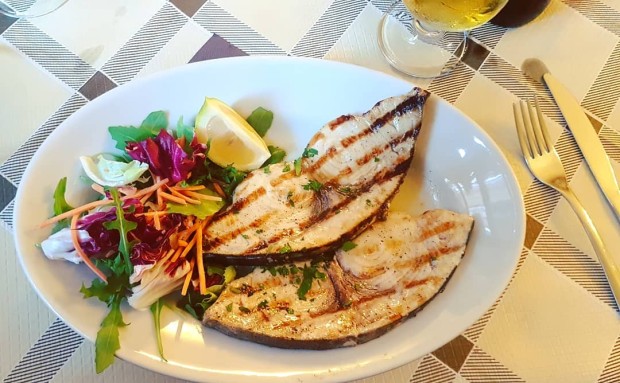 Onwards to some classic pasta, and jebus cripes there was a lot of it! We had reached stodge.com. A full bowl of pasta, cheese, onion, tomato and potato in one…sort of…clump.  It was really tasty but proved a little much to eat on a warm day (even though it’s Winter). The taste was a kind of creamy, cheesy, tomatoish medley with chunks of tomato and mozzarella scattered throughout. Good but may become a bit samey if that’s the only dish you chose to order. I don’t think I would have it again though. 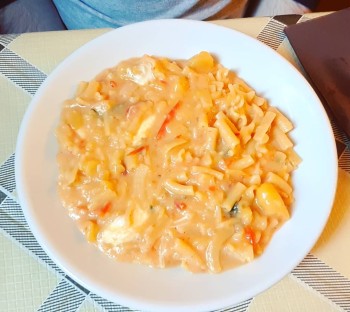 The service here was great with plates being cleared promptly, though we had to decline dessert. The portion sizes slightly defeated us but that’s definitely a plus for me. I like good food for cheap prices and lots of it! We were utterly stuffed!

Grabbing the bill, the total for 2 starters, 2 mains, a beer and a 92cl sparkling water was 39 Euros which isn’t half bad. I thought this was a cute little place with great pricing (especially if you are a wine fan) and classic food. Check it out if you’re in Naples and need a secret little place to eat away from the main road hustle and bustle.

This platter was 🔥🔥🔥 and the atmosphere matched! People were up dancing and singing from their tables, but in a good way not a trashed wailing kind of vibe 😁
Guys, you've gotta visit DF Tacos! Such hefty and juicy food packed with filling 🤤.
£6.30 for a Tomahawk Steak? Yes please. So glad we got in for this bargain yesterday! 🥩
Erotic scenes at the new Kingly Court flagship for Dirty Bones which opens officially on 4 October!
Pancakes here are DA BAWMB. Light and battery, the actual dream. 🤤🥞🤤
🧀🍔
Jackfruit tacoooooos! The last jackfruit I had wasn't great, it was trying to be pulled pork and was drenched in BBQ sauce... But this was lovely! Light and fresh. Yum! 🌮
Eggs benny and a latte, please. Cheers babes.
Breakfast food forever 💕
Check out the Summer menu additions at Wahaca! 🌷 Delish corn ribs, carnitas pork tacos... Yum. 👌🏻👌🏻👌🏻
Lemon courgette loaf 🍋
Carpaccio dreams right here 😍
Let's taco-bout this treat on the Wahaca Summer menu! The Carnitas Tacos 🌮
Nutella and banana fluffy souffle pancakes 🥞🍌🍫
Coming soon on the site we have @mrleespurefoods porridge and congee!