Although I have experienced Wrap It Up before, this was our first time to the Aldermanbury location and we had a specific mission: try the new American Smokey wrap. Fortunately, myself and Toli are fans and friends of beef brisket, the main component of this new wrap so we were both looking forward to this and also slightly fearful of the brisket quality.

But let’s start from the very beginning, shall we? I’ve heard it’s a very good place to start – thank you Julie Andrews. 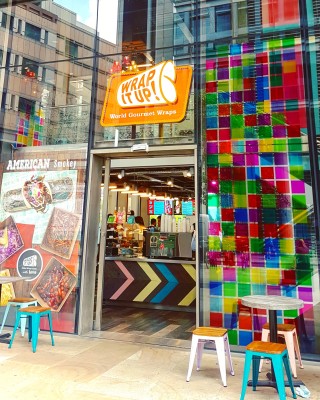 The Aldermanbury location is equidistant from Moorgate, Barbican and St Paul’s tube stations..  roughly on London Wall. It was opened in early 2016 and to look at it’s quite pleasant with bright colours and the clean Wrap It Up branding throughout – I like the multi-coloured window especially.  Downstairs we have the serving counter, upstairs there’s some seating (probably for 16 or so people) and there are a few seats outside too if the British weather is playing ball.

We arrived at around 1.30pm so the office worker queues were in full swing but even this wasn’t too bad at this particular Wrap It Up store, and customers were being served quickly and efficiently.  We ordered our medium American Smokey wraps – mine with only a little spice – and the brisket ran out before Toli’s was served – NOOOO!! However the staff were on the case and revealed some new pulled beef brisket to save the day. The beans and meat were added and the wrap was passed to the ‘salad dept’ where we had pickled slaw, crispy onions and grated cheese piled on.  There was also an array of sauces and I wasn’t sure what to go for but asked the server who helpfully recommended the sour cream. I’m a fan of that, so on it went.

I had heard that potato wedges were a part of this wrap, and I did see some being added to other wraps, but for me I am glad there were none in mine.  As a separate side yes though they don’t need to be part of the wrap itself.

We chose to dine-in and as soon as we were handed the wraps we realised the weight of the situation we were in – the literal weight of this wrap was pretty massive and the girth of the thing was epic. These can be a drippy affair so I made sure to hold the wrap in the foil and just peel back one end to chow down. And when we took our first bites, we knew this was a good thing.

The pulled beef brisket was moist, well cooked and they did not scrimp on portion sizes here. The slaw matched brilliantly giving it a slightly fresher, crunchier, more sour dimension…I didn’t notice the onion much but they were small and crispy so I am sure they added something too. The beans were also good and I wasn’t distracted by the beany texture (sometimes I am). One note I would say is that the cheese should be put on the beef so it all melts in, rather than on top of the slaw and onion.  Sometimes I noticed a little too much grated cheese in a bite but this would be resolved if the cheese was melted into the beefs.

Our initial concern for this wrap was would the beef brisket be cooked well, how would it translate into a wrap, will the slaw be too mayo-y? But I am glad to say that none of these worries were answered negatively – everything was great. We did get quite full but if you keep the foil there’s an option to effectively doggy-bag the remains or open it up and eat the filling, which is the path we went down.  Without the wrap and the other ingredients combined, the pulled brisket held itself as a strong and good quality ingredient – congrats!

Additional note: we love how spicy the Wrap It Up hot sauce is – it actually does what it says which can be rare! Gives you a little kick when you least expect it!

If Wrap It Up change up that cheese layering then we’d have nothing but positives to say, and even that’s just a slight improvement because there was nothing wrong with this wrap. I do love the quantities given by Wrap It Up – you know when you visit you’re going to get a full meal for your money rather than some store-bought products which are more wrap than contents. Spend your coins wisely and visit somewhere proper. Wrap It Up and the new American Smokey is FMPH approved!