Following our preview post last month, here we have it, the return of the East London tropical beach pop up…the Last Days of Shoreditch.  I’m unsure where the name came from exactly but positioned on the crevis of Great Eastern Street and Old Street, you’ll find a beach hideaway nestled and ready for you to pull up a deckchair.

We were lucky enough to go to the launch of FDoS and although there was a little delay on allowing entry we were glad to get to the bar and have a drink as the sun was shining and we were all excited to see what was available this season.

Food-wise there was Nanny Bill’s serving burgers including some vegan options, the avocado bar from Belli Freschi and a BBQ terrace.  There’s also a small plates section which is reservation only under a 50 seater restaurant, tickets priced at £28 which gets you 4 of the small plates available on that particular day.

Once in, I dashed to the cocktail bar and ordered myself a Skinny Colada – stupidly didn’t read the menu and saw coconut water was used rather than milk so this was waterier than the usual pina colada, but also it was garnished with a watermelon slice(it should be pineapple, surely?) and I couldn’t really taste the alcohol..for approx £8 I would expect more really. They have quite a few on offer as well as the usual wines, spirits, ciders and beers.

Food-wise, first of all I  nipped up to the Mezzanine Terrace Bar (note: no seating, a grab and go type situ) and checked out what was on offer. I went with the “charred lamb t-bone cooked pink, naughty garlic crème fraiche” priced at £7. The “BBQ beef crack rib with tom yum mayo” (also £7) sounded lush too but I thought lamb is much rarer for me to eat, so I’ll treat myself. When it was ready though….it was  a little lacking both presentation wise and definitely size wise.  It was basically a lamb chop.  Although it did taste nice and was well cooked, the lamb chop was small and left me thinking “oh…that was £7?” as my main afterthought rather than “oh my gosh that was so delicious” which probably isn’t the right impression to leave. Two per portion or just a bigger piece of meat for the buck would be better for this…I’m unsure on portion sizes for the rest of the terrace BBQ but I hope they’re bigger than the one I received. Photos for you to judge for yourself are, of course, included. The fat on the chop was delicious and I ate everything provided in the container aside from the bone! So it was good, but I just needed more of it.

Nanny Bills had croquettes advertised on the LDoS website but were nowhere to be seen on the launch night.  However, they did have burgers (both vegan and meaty) on offer along with three types of fries and….. halloumi nuggets. I am SO wishing I ordered some halloumi nuggets….another time, another time. Instead I went for their ‘the Cheddar’ cheeseburger and a portion of hand cut chips. It’s a classic single patty cheeseburger with double longman cheddar, salad, gherkins and caramelised onion on demi-brioche.

The vegan burger choices both consisted of a black bean and red quinoa combo patty, one with pineapple and sriracha mayo and the other with burger sauce, avocado and hummus.  It is nice to offer the vegans something at street foodie areas because it’s a growing dietary choice and, although it’s not one I choose to take, options are great to have for everyone. Or at least to cover as many bases as possible. 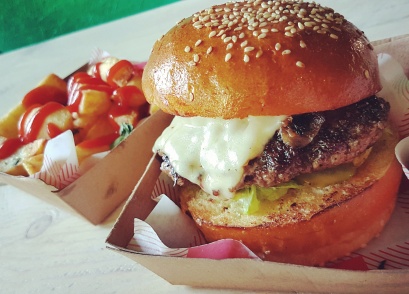 Tasting the Cheddar burger it was.. quite average. For me the consistency of a patty has become key and today Nanny Bill’s was quite tight (tee hee hee) although I think it was cooked medium or possibly medium well it was still nice but not very memorable. I know at the moment some councils are vetting butchers and not allowing vendors to cook meat from ‘unverified’ (although good and fine) butchers at less than well done, I don’t know if this was the case here. Or perhaps it was because Nanny Bills were swamped with customers..I don’t know! I do like a rarer burger though so either way I was a bit ‘mehh’ about this one. I also couldn’t taste the cheese much. The fries were indeed chunky and pretty decent but didn’t blow my socks off with crispy and inner fluffiness, so pretty standard there. Not bad, not amazing, pretty safe.

Amongst all this eating I, of course, needed to attend the ladies. The toilets are clean and the loo rolls were held on by little fake flower ribbons – cute! There are toilet attendants which is great for cleanliness and the lady was lovely but I always find it awkward when I have a slight pressure to part with my change when only going to spend a penny figuratively, rather than literally. I do want to stress that the attendant was very sweet but makes it personally makes me feel awkward being handed hand towels rather than picking them up myself.

Next up! Avocado Bae…I mean, bar. Hello! Coming out of the Belli Freschi Avocado Bar was some VERY instagrammable food. Ring-a-ding-dong! On the menu they had 2 types of avocado burger (with avo replacing the bun), an avocado veggie dog,  avocado chips/tempura and two types of pasta! So despite the focus of avocado it was quite a varied menu. The burgers were fish (£8.50) or beef tartare (£8), both served with veggie chips…nom nom. The avocado chips/tempura came with a balsamic drizzle which looked lush. I only had room for one item (well I probably didn’t have room but I couldn’t leave without trying something!) so I opted for the beef tartare burger and just took snaps of some of the other bits and bobs coming out of the kitchen.

Although the avocado burger was pretty damned tasty, my avo was a little hard and this is definitely one you need to tackle with cutlery. Avocados are slimy little gits so picking this up as you would a normal burger would be pretty disastrous.  The beef tartare was great and mixed together, everything was lovely but you need a shelf or a chair to eat one of these. A great combo of flavours and it is great to have something non-carb on the burger menu. I also liked the cheesy veggie crisp type things that came with the burger – not 100% what these were…some aubergine in there I think, but they were good. A side note is the staff were super cute as well, they really matched the presentation of the whole bar and were very smiley and chipper – great customer service!

Unfortunately some parts of LDoS weren’t finished for us to test such as the Lucky Voice karaoke room or the escape room experience ‘Plumbottom’s Magnificent Return’ or the themed rooms so all I can let you know about is the food and drink really. Atmosphere-wise it felt like more of a drinker place rather than for a foodie…the music was quite loud and more tables were probably needed but I imagine the ratios of sitting down vs dancers changes during the evening – when I was there only a few were dancing so the blaring music seemed a little out of place. 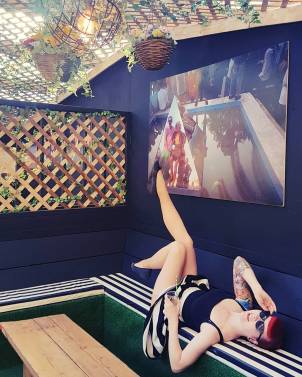 If you’re up for getting drinks down you and food is secondary then I’d recommend this place but for me the food comes first. There were a few more slots which could be filled by food traders so who knows if this will develop further over the Summer. Drop over to Old Street and see what you think!