“Happy Christmas!” I said to my chap, as he unwrapped a witty card that told him I’d bought us two tickets to see David Tennant in Patrick Marber’s Don Juan of Soho.  Admittedly, this was also a present for me, as David Tennant is one of our relationship celebrity loves and I’d timed it for the day after my 30th birthday – to soften the blow of aging somewhat.

emed a fair way away from our show date in May, but time flew and soon the day crept up. We were super excited as, weirdly, since moving to London we wondered frequently if we’d just bump into David Tennant. Why? Who knows. He has special meaning to us as we started dating just when he became the 10th (or 11th, War Doctor depending) Doctor – new teeth, that’s weird – and he was a topic of bonding for our early months together. Stupid possibly, but hey! 11 and a half years on, we were finally going to see DT acting in person. Cor!

Our seats were in Row B  at the side, with a really good view. I always check my seats on seatplan.com before booking, but you never fully know until you’re there. The Wyndham’s Theatre has a pretty low stage so we were safe. There was a good digital clock countdown on the stage ‘curtain’ which was repeated in the interval, handy for people to let them know if they’ve got time to dash to the loo or go and grab a bevvy.

Curtain up, and we are greeted by a musical group dance performance then a great solo scene from Adrian Scarborough as Stan, Don’s lackie/driver/companion. Adrian’s performance throughout is brilliant…quiet, an attempt at Don’s slight moral compass and someone who doesn’t get much in the way of action which was perfectly balanced against Tennant’s loud, unsubtle, flirty, filth-bag of a character.

Before seeing the show I’d done a little reading and possibly expected it to be somewhat similar to Casanova, also having seen Tennant in Russell T Davies’ version many moons ago…this was dirtier.

I don’t want to say too much but there were a few scenes which especially made me chuckle – basically Don Juan is a sex driven, spoilt man-child who can charm his way into the pants of anything, with no specific tastes or limits he attempts to pretty much mount the world – he would do it “even with a hole in the ozone layer”! Early on in the performance he enters clad in a well fitted designer suit and sprawls himself out on a chair, limbs everywhere.  Stan had poured a whiskey out and although the glass is about 10cm from Don’s finger tips, he flails his fingers at it, reaching and making pathetic noises….I do this a lot at home with drinks, the tv remote, my shoes…literally anything, so my fella and I had a little glance of “he is you” (only in that respect) there. Of course, Stan fetched the drink for him after a little objection, which seemed to happen a fair bit throughout the play; objection, convincing then giving in.

There was also an unexpected flash of Tennant in some rather small pink knickers and one hilarious scene sticks with me which is set at a wedding party on a boat. I will say no more on that particular point but if you’ve seen the play you’ll know exactly what I’m talking about!

The show stealers were really Tennant and Scarborough as a kind of strange hunting duo, fed by greed, lust and needing to fill a void. The two head out for a rawcus night in Soho and after an interesting encounter with a statue, the play turns a corner. The supporting cast were all brilliant – I especially liked Theo Barklem-BIggs and Dominique Moore. There wasn’t a point in this production where I felt bored, lost or anything less than tickled! I left the theatre feeling super happy and hyped up. Very good. I don’t often “LOL” but during this play I couldn’t help it!

Brilliant acting, bundles of laughs and you come out feeling confused as to whether you are on Don’s side or not – did he seduce you? I was a good 85% on Don’s team. Sorry to the ladies, men, creatures who he has wronged!

After the show, we were lucky enough to meet Adrian (provoking a special Simon reaction Simon —>)        and David to grab some  autographs and photos – both were very warm and friendly plus it was great they took time to meet their audience after they had spent hours working for us! It really finished the experience off nicely. 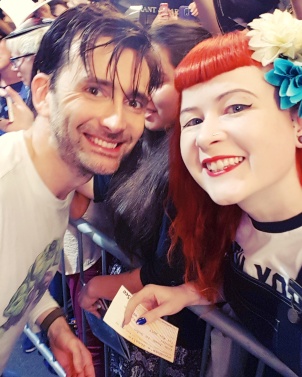 Thanks so much to the whole team involved in this production – it was truly brilliant and I have recommended it to friends and family for a great night in London. I’m hoping it shows again somewhere as the weeks this was on seemed to fly by.  The final night is tonight and I can tell you that Soho will miss Don Juan, desperately.

One thought on “Don Juan in Soho – Wyndham’s Theatre, London”

Yes! If you haven't had one, get one.
Breakfast food is the best food 🍳🥩
Oooh yeahhh. Spicy handpulled roast pork flat noodles for me 🤤
Flashback from National Burger Day! I need to try out one of his epic pizzas at @eldpizza when the weather improves! 🍕
Wish I'd visited this place more! Sad to see it's being chucked out of the current location but I'm sure they'll be back with even more delish bread bowls 💕🤞🏻 but in the meantime we can order online! 💻
Throwback to dining inside last year... This butterfish tataki is my dream date. Honestly... phenomenal. I drank the sauce after we finished the fish pieces. 🙉

Yes! If you haven't had one, get one.
Breakfast food is the best food 🍳🥩
Oooh yeahhh. Spicy handpulled roast pork flat noodles for me 🤤
Flashback from National Burger Day! I need to try out one of his epic pizzas at @eldpizza when the weather improves! 🍕
Wish I'd visited this place more! Sad to see it's being chucked out of the current location but I'm sure they'll be back with even more delish bread bowls 💕🤞🏻 but in the meantime we can order online! 💻
Throwback to dining inside last year... This butterfish tataki is my dream date. Honestly... phenomenal. I drank the sauce after we finished the fish pieces. 🙉
Hell yeah 🍫🍊
I'm very lucky to live where I do at the moment. I'm not taking any public transport so the only non homecooked food I'm eating is from delivery or somewhere I can walk to. I don't feel like traveling just for food is a valid thing for me to do just yet but I can't wait until we're a bit more "normal" again and I can visit stuff further afield... Not sure how everyone else is doing travel wise at the mo but keeping to the minimum is probably safest.
Have you seen my blog on Indigo's Cafe? Search "indigo" on forkmypiehole.com to check it out! ✨
I haven't travelled anywhere I can't walk to in months! It'll be so odd but nice to visit a bar or restaurant again. Looking forward to tropical cocktails with pals later in the year 💕
Ready for my close up... The brisket burger. Yum.
Missing stuff like this. I'm looking forward to stuff getting back to BAU this year but I'm also quite hesitant to want to go back into crowded areas. Mixed feels but right now I'd love one of these wraps! Throwback dreams.
This is called the Nutty Pig...Creamy burrata, mortadella ham, pistachio pesto spread and crumbled pistachio 🤤🤤🤤
Sweet treats 🍩
Pillowy soufflé pancake goodness 💚 wish I had these right now!