We first came across Crab Tavern at the Slider Decider at Broadgate Circle back in September. They served up a delicate lobster slider in a delightful pink bun which we were big fans of, so we were looking forward to seeing what else this restaurant had to offer.

We visited on a Wednesday night, and when we arrived for our (to be fair pretty early 6.30pm) dinner, there was only one other table of people dining. However the place was far from empty – at least 1/3 of the floor space of Crab Tavern is taken up with a bar, and for a Wednesday night this was heaving. It is The City I suppose, all those financiers and lawyers need to let off a bit of steam on hump day. The music level was more tailored to those in the bar, with clubby music playing rather too loud for a relaxing dinner in my opinion. The decor was also more like a City bar than a restaurant, although there was one wall covered with a mural of comedy crabs which I quite enjoyed, although I’m not sure really fitted in with the rest of the place!

We were seated in a booth next to one of the comedy crabs, and given the drink and food lists to peruse. Crab shack offer a decent range of wines, beers and a great looking cocktail list (which is probably why the bar was so busy), however I was still recovering from a rather heavy weekend so I opted for an orange juice.

The food menu which had a pretty big selection of things to choose from, which for me is more of a curse than a blessing as I am incredibly indecisive. There were few slightly random starters (chicken terrine, gazpacho, crab & waffle, to name a few), a section dedicated to crab (as one would expect), a selection of seafood platters, various seafood main dishes, some salads, a “light” section (which was probably the least light section with every dish served in a bun, including a few burgers) and for the non-fish lovers out there, a “grill” section which included steaks. Sadly we were disappointed to see that amongst all that, the lobster slider we had enjoyed so much was not actually on the menu.

To try to cut down the decision making time we decided that in a crab restaurant we should stick to the seafood, and it would be rude not to start with some crab! We went for the crab taster to share – king crab, soft shell crab, and crab tartare. The king crab came two ways – shredded in a brioche bun, and shredded on a crispy crouton. I found the brioche bun overpowered the crab and I didn’t think it really tasted of much apart from the bread, but the one on the crouton was fresh, light, well seasoned, and the crab shone through. The crab tartare was served on a little lettuce leaf, with some finely diced carrot and a green sauce that I couldn’t identify. The crab itself was good but there wasn’t enough of it, and I found the carrot ruined the texture for me, I think the crispness of the lettuce leaf against the soft crab would have been enough without the crunchy chunks in there. The star of the show was the soft shell crab. This was deep fried in a light batter – the coating tasted amazing, flavoured with a mixture of spices (tasted a bit like KFC batter, which in my book is never a bad thing), and it complimented the sweet crab beautifully.

For mains I went for 4 tiger prawns, which for some reason I was expecting to be grilled, but came cold on a bucket of ice with lemon. These were good, but I thought they would be bigger, and with no added flavouring prawns are prawns.

Stef ordered the scallops, which were the highlight of the meal. Cooked to perfection, on sweet potato puree, and surrounded by a delicious rich sweet sauce. This was Stef’s first time eating scallops (thanks to Rob Brydon after seeing him order them in so many episodes of The Trip). She was sold immediately, and I would definitely order this dish again. For the sides we had a portion of chips and the creamed cabbage with bacon. The chips were well seasoned with some spices, but came out a bit cold and chewy, fairly uninspiring. The cabbage divided us. It took us a while to put our finger on the flavour, but there was cumin in the sauce, which I really liked but Stef found a bit odd. We also thought the chunks of bacon were a bit too big and a bit too hard to really work in the dish. 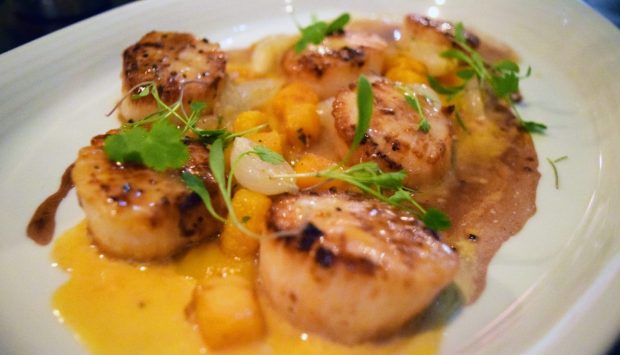 We finished off with the chocolate brownie, and the “seasonal fruit tart” which was a lemon tart. Not sure October is lemon season, but I suppose it is somewhere… The brownie had a deep chocolatey flavour, and came in two fairly large triangles with salted caramel ice cream on the side. I’m not one to complain about my dessert being too big but given the richness and the thick texture I don’t think many people would be able to finish both pieces. The lemon tart was fresh, light, and zingy. The pastry was good, but there was too much cream on top and not enough of the lemon filling. The raspberry coulis and sorbet it on the side were excellent. Overall we thought crab tavern was OK but not quite hitting the level we’d expect given the cost – £94 for 3 courses and a soft drink each for two people (inc £10 service). The prices are probably elevated because of its position in the middle of The City, but when you’re next door to the likes of Jose Pizarro we’d expect the standard to be a bit higher. Everything looked quite nice, and nothing was particularly bad – some things were better than others, but it kind of had the feel of a chain restaurant, or that the food was a second thought thought to the bar, rather than a restaurant that was set up for the dining experience.