Dirty Bones. You have been on my radar for a while but always seem to have wait lists or are booked up when I try and step through your door. I guess this is the price I pay when I try to pop in to popular places! I saw your Shoreditch opening and jumped at the chance to go!

I tried to book the first week of their soft opening just after it was announced (I needed to get there, STAT) but it was already jammed! So I settled for the second week and I was really not disappointed.

Situated just up the road (Bethnal Green Road, to be precise) from Boxpark, Shoreditch, Dirty Bones have set up camp in a pretty classy looking restaurant. Or I thought so anyway! I did try about four different doors to get into the place but am a bit of a buffoon and got there eventually (for reference it’s the doorway on the corner!).

The staff were attentive straight away, found my booking and led us to our table. Nearly as soon as we had sat down, we were brought glasses of tap water which I really did appreciate rather than having to ask for some. Nice touch!  The atmosphere in there was great, not overly loud fun music, lowish ‘cool’ lighting with a neon sign pointing upstairs to the ‘Dirty Rooms’ (toilets – but they were actually very clean). We weren’t rushed to order and throughout the meal we were checked on to make sure we were ok or if we wanted any more drinks (we are Lager Shandy people).

Food wise, the menu was varied but not overwhelming and there were a good few things I wanted to have.  So what did I go for? I couldn’t resist the Shoreditch Special – as this is the new Shoreditch location and it would be rude to not sample their special dish – the Cheeseburger Dumplings also peaked my interest and a side of Collared Greens made me feel a big healthier about my life choices.

The Cheeseburger Dumplings were originally intended as a starter, but we had them as a side which was offered freely by our waiter.  There were five in the portion and they were pretty much gyoza with cheeseburger meat inside! They were strange in that even though “Cheeseburger” is in the name, you don’t expect them to taste like cheeseburger because of the gyoza appearance.  I really liked them though, well done. I was a bit of an eejit and missed out on dipping them in the bone marrow sauce it was presented on but I’ll have these again just to make sure I get the full experience. Heh heh.

Shoreditch Signature Lamb Ribs = oh my…  Now these were ‘proper bo’ as people never say. Really really good. Some ribs had a lot of fat but as these ribs had been slow cooked for 15 hours it was the good melty buttery kind of fat rather than chewy gristle and it brought both brilliant texture and taste. Salty. Soft. Buttery (biscuit base – no there wasn’t a biscuit base but I can’t write buttery without finishing the Gregg Wallace saying) but with a crispy outside.  I love lamb but never cook it at home so for me this was a real treat, and for sure this is something I could never replicate within my own four walls. The aftertaste was great too…really lamb, which sounds ridiculous maybe but there wasn’t anything overpowering the lamb flavour, just complimenting it.

The presentation was nice, a little lamb chop looking mound, rather than ribs in a rack as I had expected,  and I found myself getting as much meat from the bone as I could. Yes. I will have this again and can see why it is the signature dish.

As a side we opted for the Collared Greens which were described as ‘sauteed’ with garlic, red chilli and soy – unusual!  I wasn’t sure what these were, and could have asked, but they sounded tasty regardless.  From eating them, I think they were cabbage? Maybe? I have no idea.  The sauce was delicious and different to other greens I’ve had and didn’t expect a side like this to appear on the menu.  Texture wise these were quite crunchy rather than being steamed/soft but that was fine with me.

We had foolishly eaten quite a big lunch but Dirty Bones were happy for me to take some of my lamb and the greens away in a doggy bag because we had to apply a strategy to allow us to sample some pud. Thanks team!  I reheated both the following day with just a little time in a lowish heat oven and they were still amazing. I really can’t get over the lamb…wow. 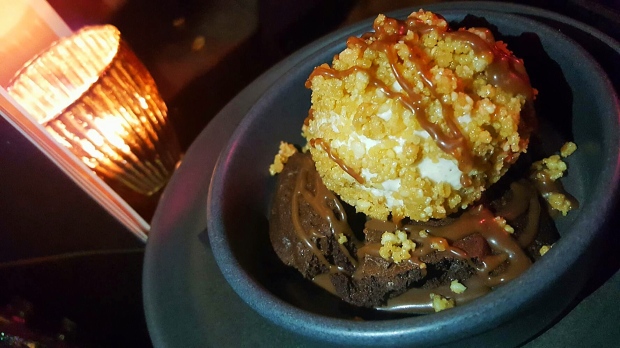 The dessert menu came round and there were a lot of waffle type things on there and realisitically I just couldn’t fit a waffle in on top of everything else I’d eaten that day. I love peanut butter so we chose the  Peanut Butter Cookie Cup.  This wasn’t what I expected but it was really lush and surprisingly light.

Basically it was peanut gelato covered in honey nut brittle (mm honey nut brittle) sitting on a dark chocolate cookie (very soft, like a cross cookie brownie).  It was properly lush with all the different textures, and it made me realise how much I love, but neglect, brittle. So good.

As you can tell I REALLY enjoyed my visit to Dirty Bones Shoreditch and can definitely see why their soft opening booked up so fast and they always have a high level of custom. Definitely worth it at about £30 a head (inc some booze), book in and enjoy. I will be doing that very thing soon…once all this food goes down. Phewph.