Basque food seems to be the flavour of the month as this was the first of three new Basque places we tried this August! Eneko at One Aldwych is the new offering from three Michelin starred chef Eneko Axta. Eneko officially opens Today, but we went along to the soft opening a couple of weeks ago to check the place out.

Eneko is supposed to be a relaxed, informal setting vs Mr Axta’s Bilbao restaurant Azurmendi, which is currently ranked an impressive number 16 on the top 50 restaurants in the world. Now I haven’t been to Azurmendi but I’m sure with 3 Michelin stars behind it it is probably a pretty swish affair, so by comparison perhaps Eneko is more low key, but “informal” it is not. It is still pretty fancy if you ask me.

You enter the restaurant from the corner of Aldwich, descending  from street level into a mezzanine bar with an excellent selection of Spanish wines. Once your table is ready you’ll be escorted downstairs into the restaurant and shown to your seat (or at least should be, but I think they were having a few teething issues and we were kind of left loitering at the bottom of the stairs wondering where to go as the lady that was supposed to show us to our table had gone AWOL). The dining room is ultra modern, with randomly shaped red leather booths made to fit custom made tables along one wall. We noticed the nice wood (I think ash?) that the tables were made of… which I guess is where the “informal” thing comes in – no tablecloths. Other than that pretty fancy! The kitchen is open at one end, which I’m always a fan of – I love to see where the magic happens. The large team of chefs works cleanly, quietly, and meticulously putting together beautiful plates of food. Next to the kitchen there is a black double height wall made of hand-carved textured wood which conceals the door to the loos (it took us ages to work out where they were, and after one of us went everybody in the restaurant seemed to breathe a sigh of relief and follow suit). In case you’re wondering the loos were also suitably fancy – think waterfall taps, individual hand towels, and vanity table with seats for powdering one’s nose.

On to the food… they started us off with a selection of bread, and a generous portion of butter with a bay emulsion, which is mixed into the butter by the waiter at the table. To be honest I couldn’t really taste the emulsion but I enjoyed the little bit of theatre, and appreciated the decent amount of butter they gave us as I usually find myself scrimping to make it go round the table or having to ask for more. The menu has a good selection of choices including seafood, meaty, and veggie options. There was one particularly dramatic starter called “Memories of the Bay of Biscay” which features a selection of seafood on a beautiful serving platter over dry ice. It is quite a spectacle, however I can’t comment on how it tasted as being one of four carnivores on the table we weren’t messing around with fish. When we saw something called a “Pork Festival” on the menu there was no point looking any further. This was pork three ways – tempura pig jowl, suckling pig in fried brioche, and Iberico ham and mushroom duxelle in soft soft milk bread (reminded me of steamed chinese buns but even lighter). It came served in a box with a hand carved pig’s head on the lid… nice presentation but I thought they whipped the lid away a bit too quickly – we had to ask the waitress to bring it back to get a snap. 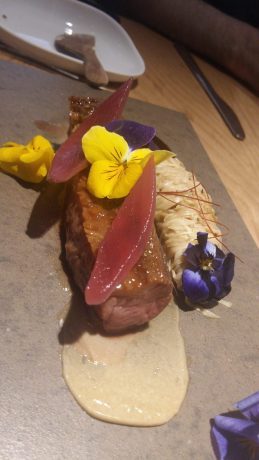 On to the mains… I went for the oxtail, which came beautifully braised and shredded in a deep rich sauce, decorated with pretty edible flowers. Rather oddly it came served on a plate shaped like a featherblade (the bone they get the flat iron steak from, as we learned at Flat Iron), which really has absolutely nothing to do with oxtail, but I suppose they were carrying on the theme of dramatic presentation. One of my chums picked the seared duck breast, which looked amazing and also came decorated with flowers. We both had the mash as a side which was thick, smooth and yum. Since this place is fancy it was no huge surprise that the portions were pretty small… I guess that’s why they fill you up on free bread at the start.

The desserts are presented on a tiered trolley and are staring you in the face for your entire meal so it’s hard not to want one by the end of your meal (plus you probably aren’t full yet from the first two courses). After a lot of deliberation and careful examination of the pretty little things on the dessert trolley I decided to try the one thing on the menu that I couldn’t see, the Torrlja, a Basque vanilla sponge. It was a bit like a bread and butter pudding, with a sponge soaked in a thin vanilla custard/syrup with a hint of citrus, and a crispy burnt sugar top. I was expecting this to come warm but it was served cold, which I wasn’t sure aboout at first, though after I’d got used to the temperature it was actually really nice. Quite different to your usual restaurant dessert and I’d definitely have it again. All the desserts come with Basque sheep’s milk ice cream, which was creamy and not overly sweet.

I haven’t really mentioned the service, which was good throughout, until it came to paying the bill. After our dessert plates were cleared away we kind of got forgotten about and eventually had to ask someone for the bill. After the bill was brought over it then took us an age to get someone to come and take our payment, and I saw another table actually get up and go to the desk to pay so they could be on their way (this isn’t Nando’s and at these prices you should expect to be able to pay the bill from the comfort of your seat!) I suppose this is the reason restaurants have soft openings, to iron out these sorts of issues, and I’m sure by now they will be running a slick operation.

Overall the food was great, setting was impressive, service was almost there, and it was a good lunch. But the portions were pretty small and if we hadn’t had the bread we probably would have left a bit hungry. If you can afford this sort of place regularly I’d say go for it and give it a try, but for me it is quite pricey and there are other places I’d rather go for the money.

Fave 🥰
Meatballs ❤️
I mean where else for National Burger Day?
🇫🇷 Feeling French. Yum from @crepesalacartelondon 🇫🇷
Did someone say 4 course/12 dish brunch?!
Riiiiiiiiiibs!
Strawberry pistachio light and fluffy clouds in my face 😍
Bakewell and iced coffee makes everything good. Amen.
Living that sushi life! Super light popcorn shrimp and salmon maki rolls ❤️
The best scrambled eggs on one plate and the best chicken sarni on the other 🙌🏻
❤️Go get this bottomless brunch!❤️
It's a pitta partayyyyy🥙🥙🥙🥙🥙🥙
Does it count as one of your five a day if there are strawberries? 🍓
These sarnies from @breadandtruffle are always banging! I'd recommend upgrading to burrata which I think was standard a last year but now is a small extra fee. It fills up the sarnie more and burrata is a reliable dream! 🧀❤️
Genuinely love these wangs 😍