Now it’s not often you’ll see a meat lover like me get excited about mushrooms. Don’t get me wrong, I like mushrooms as much as the next person – more than many in fact – but I do always pity the vegetarian whose veggie option is a giant mushroom in place of what should be a big hunk of meat. What do mushroom hating veggies even eat?!

Anyway back to the issue at hand. The bloody amazing Pâté Moi mushroom pâté, aka “The Borough Market Pâté”. Even with all the wonderful delights that Borough Market has to offer, this has to be one of the highlights. A number of my colleagues and I would make a special trek across the river at lunchtime just to pick up a pot of this stuff for the weekend – it’s that good.

I think even staunch mushroom haters would struggle to take issue with this stuff. It is simply delicious. It doesnt actually really taste of mushrooms, the flavour is hard to describe but you definitely get a hit of cheese, and I know it’s a cliché to say it has such a depth that it is almost meaty. However it is 100% veggie friendly consisting of just organic mushrooms, cheese curds, butter, wholemeal breadcrumbs to bind it and a selection of seasonings. 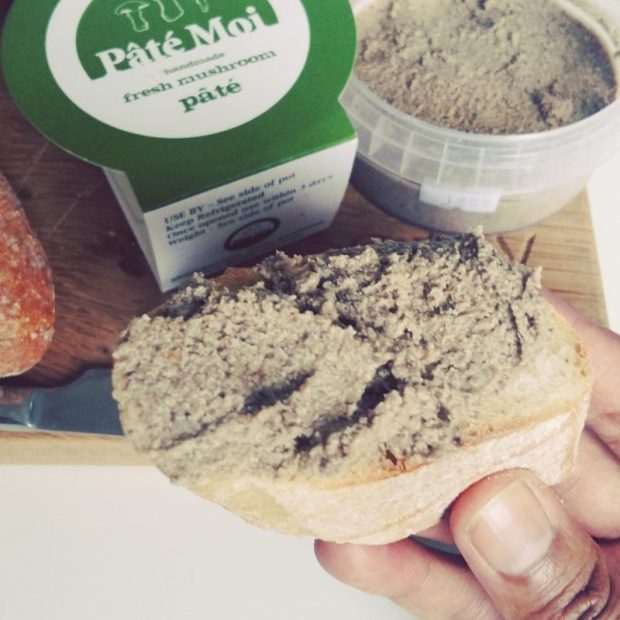 The stuff is addictive. I got through almost an entire tub of it in two days when working from home this week. My boyfriend was less than impressed to come home to find an almost empty pot on the table and a very guilty/smug me beside it. He swiftly expropriated the tub and wolfed down what was left while he had the chance.

The recipe was apparently thought up by the producer’s brother at the age of 8 and is a closely guarded family secret. As lovely as that story is, I struggle to see an 8 year old coming up with this all by himself, and given that the producer used to make a living as an advertising exec and I sense a bit of spin here. In any case whatever the true origin of the recipe it is delicious and I’m glad someone thought it up and decided to sell it to me!

If you find yourself at borough market and fancy something a little different to spread on that loaf of bread you just bought from the artisan baker, or to accompany the selection of cheeses and cured meats you just bought for your dinner party, give Pâté Moi a try!