Last week we were feeling lazy or didn’t have anything in, or plans went askew…whatever. We ended up ordering takeaway through the DineIn site. We decided to go with Poppies of Spitalfields as I’ve heard great things but never actually been. Wah!!!

Order plaicing was fine and dandy, pretty standard through the website so I guess that’s not down to Poppies but it took about an hour to show up. Though I probably should appreciate that it is a very busy place! Darn it. The goodies arrived hot even after the delay which was a good thing in little cute Poppies boxes. 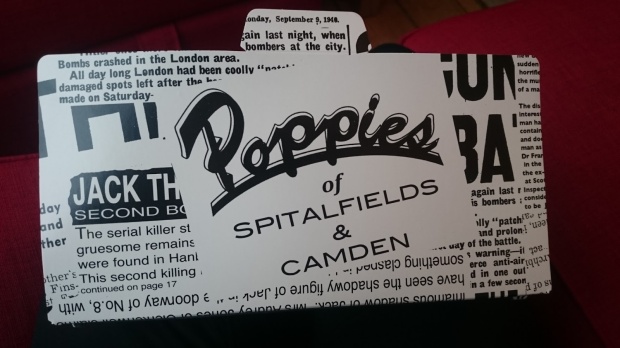 We ordered the groundnut oil fried cod which came with chips and, oh my Cod! Cor blimey! Their reputation is built on very firm filleted, delicious grounds. The chips were light and didn’t leave you feeling like you’d eaten a block of lard (that’s a good thing) and the fish tasted fresh and not over battered. What a ray of light! The meal came with a little jar of tartar sauce too which I am not usually crazy on, but this stuff was really nice. I didn’t use any other sauce or any salt/vinegar which is probably evidence to how good the food and sauce was by itself. 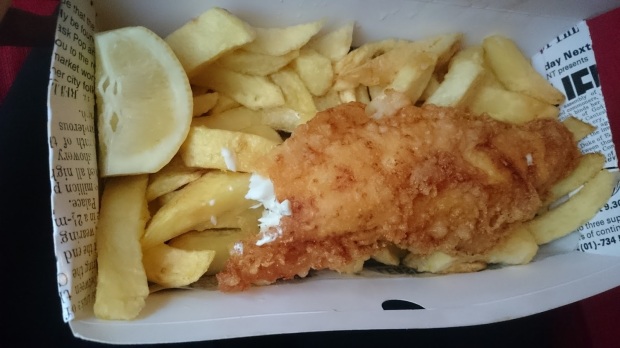 I was a bit worried about this order as a lot of grease and fish and chips of the past (of the past? what?) has made me feel a bit sicky afterwards but that didn’t happen at all with Poppies. Maybe it’s the different oil they fry in or something, I’m not sure.  (Hali)But I do know that I will definitely have to visit one of their sit down restaurants for a proper meal there.  And I would advise you to aswell.

As a finisher-offer tip I would say to order from the restaurant if you can, it’s cheaper and obviously there are no delivery fees!

Sorry for the fish puns. But not really.

What I wish my brekky looked like... Vegan chocco raspberry brownie and an oaty cup of joe... 💭
They do every dish so, so right. Oh yeahhh French toast with strawberries and lemon curd 🍓🍋
Love this cute can design from Dong Feng Brewing!
Yes! If you haven't had one, get one.
Breakfast food is the best food 🍳🥩
Oooh yeahhh. Spicy handpulled roast pork flat noodles for me 🤤

What I wish my brekky looked like... Vegan chocco raspberry brownie and an oaty cup of joe... 💭
They do every dish so, so right. Oh yeahhh French toast with strawberries and lemon curd 🍓🍋
Love this cute can design from Dong Feng Brewing!
Yes! If you haven't had one, get one.
Breakfast food is the best food 🍳🥩
Oooh yeahhh. Spicy handpulled roast pork flat noodles for me 🤤
Flashback from National Burger Day! I need to try out one of his epic pizzas at @eldpizza when the weather improves! 🍕
Wish I'd visited this place more! Sad to see it's being chucked out of the current location but I'm sure they'll be back with even more delish bread bowls 💕🤞🏻 but in the meantime we can order online! 💻
Throwback to dining inside last year... This butterfish tataki is my dream date. Honestly... phenomenal. I drank the sauce after we finished the fish pieces. 🙉
Hell yeah 🍫🍊
I'm very lucky to live where I do at the moment. I'm not taking any public transport so the only non homecooked food I'm eating is from delivery or somewhere I can walk to. I don't feel like traveling just for food is a valid thing for me to do just yet but I can't wait until we're a bit more "normal" again and I can visit stuff further afield... Not sure how everyone else is doing travel wise at the mo but keeping to the minimum is probably safest.
Have you seen my blog on Indigo's Cafe? Search "indigo" on forkmypiehole.com to check it out! ✨
I haven't travelled anywhere I can't walk to in months! It'll be so odd but nice to visit a bar or restaurant again. Looking forward to tropical cocktails with pals later in the year 💕
Ready for my close up... The brisket burger. Yum.
Missing stuff like this. I'm looking forward to stuff getting back to BAU this year but I'm also quite hesitant to want to go back into crowded areas. Mixed feels but right now I'd love one of these wraps! Throwback dreams.