Today, children, I am going to tell you about a burger that passed my lips in a city you may have heard of – New York AKA The Big Apple.

I was strolling down past central park, had just visited a very heavily policed car boot sale (NY has a ton of cops all standing around looking casual) and ended up meandering around just checking out what was what. But then. Hunger strook. Er…yeah. A Shake Shack was in the distance. This didn’t overly please me, I will admit.

I’ve had Shake Shack before in the UK and it didn’t blow me away. People bang on about it like it’s the second coming of jebus but really it was just a burger for me. But I thought hey, let’s give it a crack. THIS IS AMURKUH! And I was pleased I did. This location was, in fact, the second ever Shake Shack to open and it has welcomed folk through the door since 2008.  For reference, the address is 366 Columbus Ave and we sat in the conservatory bit so we could people watch and see the park.

When the food arrived, the burger looked like a cartoon burger – with the salad popping out perfectly, oozy cheese and then the thick meat below. This is quite rare when comparing against some UK (or other international) burger chains…often the pictures look tasty and the burgers come out cardboardy and flat. Not the case here. And they are also presented in little glove bags. That possibly sounds too fancy but you can see what I mean. Less hand mess – nice!

Getting down to business, the burger was tasty – had way more depth than the UK version I tried . Juicy, pink in the middle – good work Shake Shack. It was a delight and I was very surprised by it…maybe my low expectations and the surprise yum left me in a state of burger-related-shock. Really good. We left talking about how surprised we were and how we really enjoyed our meal, expecting only something mediocre. We also ordered crinkle cur fries which were good (fluffy, crispy….) but this isn’t a chip post is it? HEY?

I do have to mention that I also ordered a shake. A ‘black and white’ shake. Yes. YES. Yes. Thick. Chunky. I had to take the lid off and use my straw as a spoon because some of it was so thick. Chocolatey and vanilla-y. Thick, tasted like quality. That’s what I like – the ingredients chucked into a blender just for me rather than being squeezed out of a flavour sack. Way to make me feel special. Blush,

The staff were, as I have found is pretty much the case everywhere in the US so far, delightfully pleasant. Customer service really is done well in America, so much so it makes us English folk suspicious!

A few things I would have improved about the Shake Shack experience is table availability and the wait time. I know this isn’t a fancy joint with someone there to greet you and guide you to your reserved booth but we had to hawkeye a family until they were finished eating then swoop in desperately in order to have a place to rest our buns. Both burger and glutes. The food wa 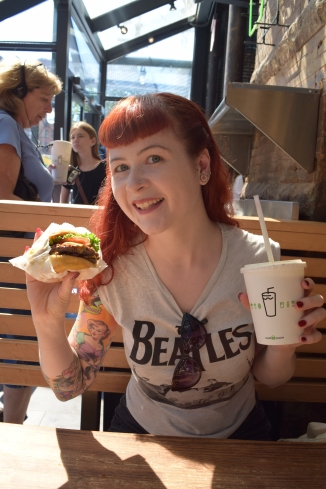 it was also a little longer than I would like for ‘fast food’ but it was popular and it is a burger chain joint in America (the USA does seem to love the lardier food option – and so do I) so perhaps I should expect to wait a while? Or maybe they should be experts whamming burgers into customer mouths as soon as they utter the word “cheeseburg…”*ORMPH* (that was the sound of having a burger stuffed in your mouth by the way).

I love you England but Shake Shack is better in New York. Also, NEW YORK. Yeahhh!!

I've been thinking about this almond croissant all week... and it was delicious. Paired nicely with an oaty latte and a park walk 🥐
Fave 🥰
Meatballs ❤️
I mean where else for National Burger Day?
🇫🇷 Feeling French. Yum from @crepesalacartelondon 🇫🇷
Did someone say 4 course/12 dish brunch?!
Join 2,129 other followers

I've been thinking about this almond croissant all week... and it was delicious. Paired nicely with an oaty latte and a park walk 🥐
Fave 🥰
Meatballs ❤️
I mean where else for National Burger Day?
🇫🇷 Feeling French. Yum from @crepesalacartelondon 🇫🇷
Did someone say 4 course/12 dish brunch?!
Riiiiiiiiiibs!
Strawberry pistachio light and fluffy clouds in my face 😍
Bakewell and iced coffee makes everything good. Amen.
Living that sushi life! Super light popcorn shrimp and salmon maki rolls ❤️
The best scrambled eggs on one plate and the best chicken sarni on the other 🙌🏻
❤️Go get this bottomless brunch!❤️
It's a pitta partayyyyy🥙🥙🥙🥙🥙🥙
Does it count as one of your five a day if there are strawberries? 🍓
These sarnies from @breadandtruffle are always banging! I'd recommend upgrading to burrata which I think was standard a last year but now is a small extra fee. It fills up the sarnie more and burrata is a reliable dream! 🧀❤️